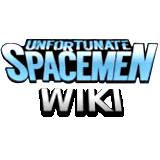 the Unfortunate Spacemen guide for Spacemen, the Monster, Tasks and more written and maintained by the players.

We are currently maintaining 361 pages (56 articles).

Please feel free to contribute by creating new articles or expanding existing ones.

Unfortunate Spacemen is a game about space and space-based murder in space developed by Sandswept Studios - and now is further developed by Geoff "Zag" Keene alone. The core element of the game is about a group of spacemen, who are trying to survive on a space station. And not everyone looking like a fellow spaceman is really one, but a gruesome monster, trying to kill the other astronauts. Players not only can play the spacemen, but also can slip into the role of the monster.

Play for FREE now on Steam!